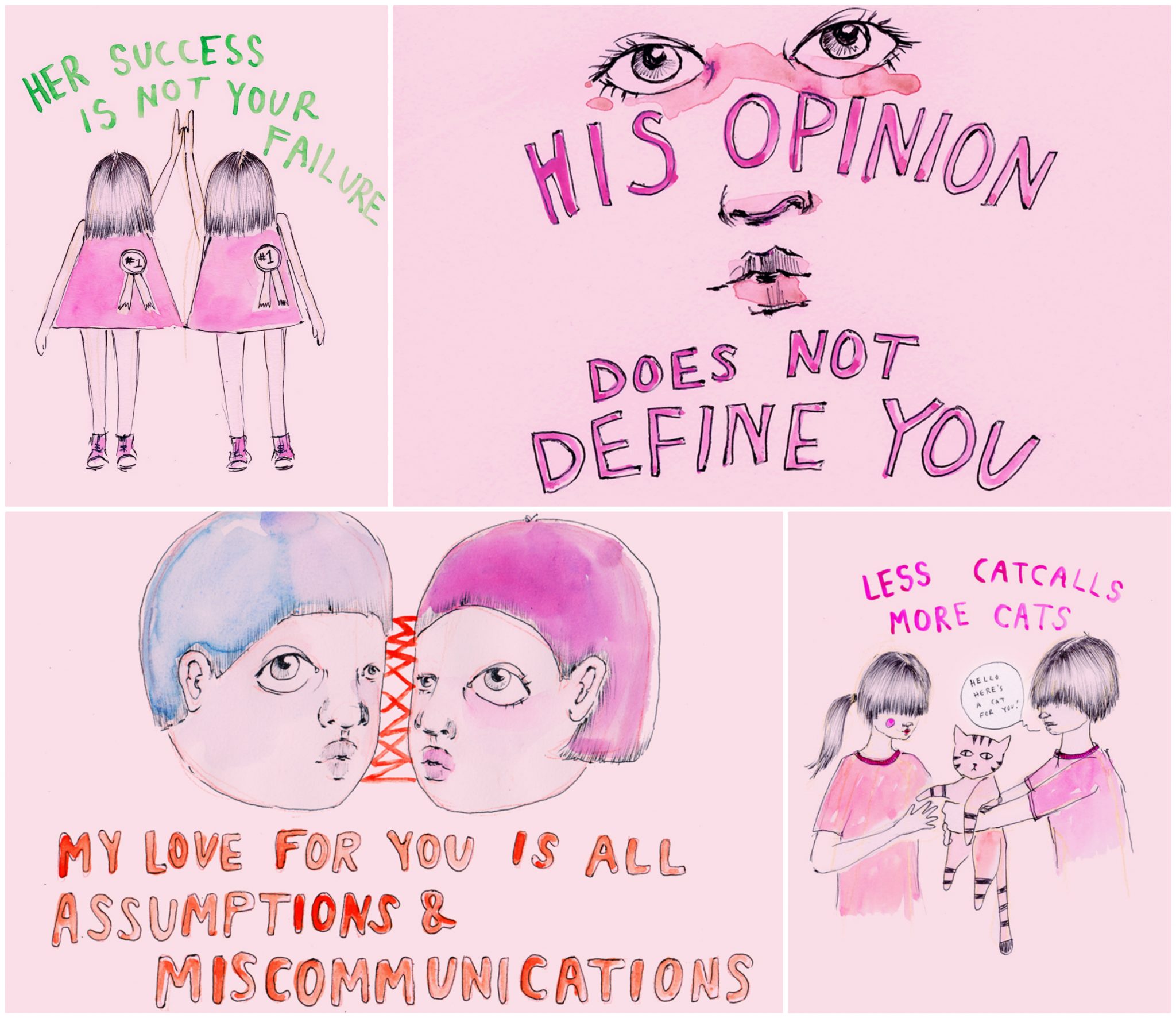 Whether you know it or not, you’ve encountered Ambivalently Yours’ work. The anonymous artist has been taking over the internet with her messages about feminism, kindness, mental health as offers advice to her followers and draws based on their social concerns, thoughts and personal issues. Personally I’m a great fan of Ambivalently Yours and often grace my lockscreen with her work. Her art is everything I love- meaningful yet never brash, thought-provoking, self-love promoting, very very pink.

I talked to the mysterious Ambivalently Yours to discuss her work, her motives and her inspirations…

Tell me a bit about yourself

I like pink, I’m a feminist and I’m a woman who uses female pronouns. I don’t share any other specific personal info online. I kind of like the idea of letting Ambivalently Yours be less specifically about me, and more about the ideas behind the work. I also feel that my online anonymity prevents me from censoring myself too much when sharing my stories and opinions.

When and how did you first start getting into art? And when did you think to mix feminism and art?

I’ve been interested in art ever since I was a small child. I actually used to get in trouble in kindergarten for spending too much time in the arts and crafts corner. I became interested in feminism as a teenager, yet I didn’t know the language enough to call it feminism at the time. My art feminist art practice officially began when I started Ambivalently Yours in 2012. I was studying feminist art and working in the fashion industry, which seemed like a huge contradiction at the time. At work, I was the feminist killjoy every time I raised a concern about the sexist undertones in our campaigns, and in art school I was the fashion girl who many assumed was duped by the patriarchy just because I liked cute clothes and girly colours. I felt caught somewhere in-between two worlds that I both loved and hated at times, in other words I felt ambivalent. I eventually decided to embrace my contradictions and Ambivalently Yours became my way of unapologetically exploring my feminist questions from this in-between place.

What’s one thing you hope to achieve through your art?

When I created Ambivalently Yours I began making drawings inspired by my ambivalence and posting them on my Tumblr page (http://ambivalentlyyours.tumblr.com/). Eventually, people started responding to my work by writing personal messages to me online, to which I began answering with more drawings. When people ask me for advice, I try to offer alternative perspectives and reframe their questions by turning them into drawings. I knew I always wanted my work to have a collaborative aspect, which is why I put it on the Internet, but I never expected it to become so interactive. My ambivalent questions have become a sort of online conversation, based on empathy, feminist ideas and the celebration of contradictions.  My hope is to inspire people to keep asking better questions instead of settling for incomplete answers.

what/who are your main inspirations?

I love how supportive and caring you are on tumblr! What made you decide to open up your ask box to give people advice?

There is a huge support system that exists online, especially on Tumblr, so this is not a practice that I invented, but rather something that my work sort of mutated into as it adapted to its online environment. I think that by being overtly emotional and unapologetically undecided, I made it easier for people to empathise with my drawings. The act of responding to these messages with drawings allowed me to empathise with them as well. The drawings become a collaboration that expresses our shared empathy, and that becomes a support system for all involved.

Do you prefer to draw based on your own feelings or others?

I like when my drawings can be a little bit of both. Many of my drawings are made in response to the messages and questions that people send me. So the drawings are partially inspired by the stories of others, but of course there is always a little bit of my own life experience influencing everything that I do.  It is a sort of collaboration between the people who write to me online and myself.

What 3 things in the world would you like to rid of?

Which social misconception do you most want to destroy?

That people are easy to define, that everyone should/can fit into specific groups, when in truth, we are all infinitely unique and should be celebrated for it.

What is the main message you’d like to send to women?

Don’t let their opinions define you.

Why do you need feminism?

My thoughts and ideas about feminism are forever changing. The more I learn, the more I read, the more I talk with others both on and off my blog, the more I have to reevaluate my convictions. I’m not trying to present clean and resolved messages in my work, but rather I’m trying to highlight the messiness and the questions.

What I do know for sure is that people of all genders deserve to be valued equally, even if they are different.  The same goes for people of all races, religions, and sexual orientations. I believe in fighting for equality, but when I say equality I don’t just mean take the rights that dominant groups already have and give them to marginalized groups too, but also acknowledge that people are different and may have different needs. This means that feminism isn’t a static thing, but must constantly evolve and reevaluate itself to adapt to the current social structure.

Women have gained a lot of rights in the last century, and many people think that feminism is over, because we supposedly have everything we asked for. At the same time, feminism is also very trendy right now, which is good, but also a little scary, because as we know, trends are fickle and what is trendy now probably won’t stay in fashion for very long. I think that there is still a lot of gender inequality in our society and being a feminist today means seeing that although we have gained a lot of rights there is still a lot of work to do. Feminism is more than wearing a cute top that says: “girl power”, it is a conversation that we need to keep having.

I can’t pick a favourite. It changes all the time, depending on my mood.