Being A Girl Before A Drummer 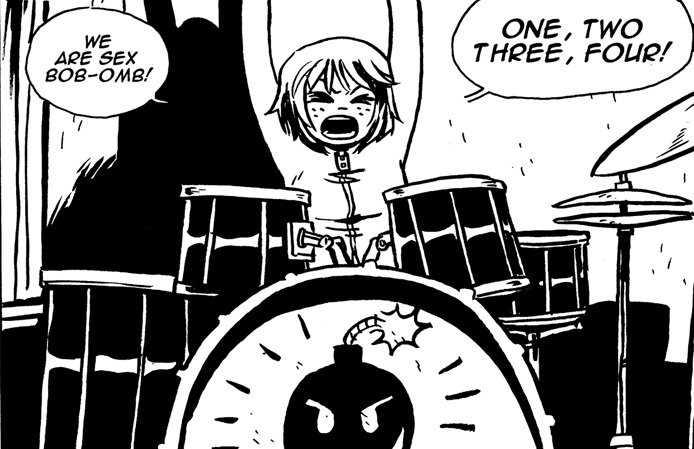 I’ve played the drums since I was 9 (I’m 18 now) and over the course of the past 9 years I’ve had both negative and positive experiences of being a drummer. I’ve encountered idiots who have gone out of their way to say they’re better than me (who goes to a random person’s friend’s house just to arrogantly slam down a drum battle invitation because you just know you’re “better than that girl” loooooserrr) BUT I’ve also had really great memories with various friends in several bands during secondary school and college, where I’ve been able to wholeheartedly play music with other talented musicians who enjoy banding as much as me (shout-out to dutch mattress, an irregular affair and other hideously named bands I’ve played in).

Comments that I’ve encountered far more than once have resulted in me feeling like I have to constantly validate myself as a drummer in a way that I don’t think male drummers would necessarily have to (but please correct me if I’m wrong).

“I play the drums “…”That’s cool but are you actually any good?”

“Oh not blowing your own trumpet or anything then…”

It’s getting tiring being dismissed by questions like “yeah but do you play properly?” and then being snubbed when I justify myself “well yeah pal I mean I passed my grade 6 with distinction, I teach people as a private tutor how to play and I’m doing my grade 8 next month “…”WOW BOASTFUL OR WOT CALM DOWN WOAHHH”. *rolls eyes*

It’s reached a point of ridiculousness where I was actually approached with the question in college last year, *legit serious* “___ asked if your middle name was actually drums? (grace_drums was my insta name for a while…)Like is that actually a joke? Is it so unfathomable that i (maybe just in general or as a woman) play the drums. Is it really more logical to assume it must be a weird Asian middle name or what huh? It seems to be this first impression that I give off saying I’m play drums but it’s just a bit of whimsical messing around, a cute hobby probably picked up from my more superior drummer boyfriend (I did have a drummer boyfriend at one point but that’s not the point… if anything I taught him some stuff)

So what is so enigmatic about a female drummer? I took to Reddit and various drum forums to painfully scroll through numerous threads asking the same question. The  answers stretched from “women don’t like loud instruments because they’re more reserved than men, it’s genetic” to “The  bouncing/jouncing around that most drummers end up doing hurts the woman’s chest” (um they have SPORTS BRAS for that shit). An array of reasons for the lack of female drummer role models in the music industry generally fit the notion that “women drummers struggle to deal with how unhygienic tour buses are and the sweatiness of drumming” (what about all the other female musicians that tour frequently then…)

It’s arguable that gender roles play a significant part in the underrepresentation of female drummers, so are the drums a stereotypical masculine instrument? Recently my house was basically a building site and a couple of builders complimented my drumming to my mum, “Your son is really good on drums” Awks. So maybe the root of the problem is that the drums aren’t an encouraged instrument of choice for young girls. I can’t say I experienced a childhood where my parents pushed the gender roles of society on to me and my two siblings though, I was encouraged to play drums, to skateboard, my brother had barbies and toy prams, my sister had footballs and toy cars. The music school I attended had female drum tutors and a mix of students so it never occurred to me when I was young that there was a disparity between the sexes when it came to playing the drums. However as I got older I noticed physically I’m maybe not what you’d picture when thinking of a drummer. I’m a 5ft tall, mixed race Asian gal with biceps and forearms that are not achieved by playing the piano for 9 years. I’ve learned to be empowered by all the different factors that make up me from experiences and the female drummer role models that are prevalent in the music industry.

While I have so many male drummer models, there’s also so many notable female drummer inspirations who have equally impressive backgrounds as drummers as their skill, such as the following;

Patty Schemel was the drummer in Courtney Love’s band Hole from 1992 until 1998. Patty brought various identities from her seattle grunge and riot grrrl scene, paired with back then being one of the few female drummers, Patty’s career in Hole and onwards was badass but tragic (she has a cute life with her wife, child and adopted dogs now so it’s all good)  Her rock doc ‘Hit so Hard’ is really worth a watch.

A powerful inclusion of female musicians in popular culture is down to Queen B. Kim Thompson is the drummer in Beyonce’s all-female touring band. Not only is she an amazing drummer with all the bands she plays in and as a soloist (her solos give me shivers, they’re actually sick) but she’s inspiring for other young women trying to break into the industry, “I’ve had to definitely fight for what I want and what I deserve to- any female or young girl, stay focused”.

Deap Vally is one of my forever favourite bands. Being only a 2 woman band, Julie Edwards and Lindsey Troy are a force of raw badass feminine power. They embody everything I love in a band. I’d say she’s shaped the way I play music with her “simple-yet-intentional, musical, and often linear grooves have the aesthetic of 1960’s shuffles on acid”. Edwards is also definitely concerned about the under representation of female talent, as a part of Moon Block which organises festivals, of which the Desert Daze festival in was made up of 30% female acts, far greater than the 13% at Warped or 17% at Coachella.

Janet Weiss is a prominent drummer in rock coming from a pretty much self- taught background, performing in bands such as Sleater Kinney and White Flag. Weiss has been in the music industry for a while and has experienced her fair share of sexism but pushes a powerful message about not being afraid to be bold and present through her music: “There’s sexism everywhere. Hopefully it’s getting better and people are becoming more used to female musicians. There are not that many all-female bands, there just aren’t. People call as soccer moms sometimes. That’s why it’s important for our music to not be timid. We’re showing people that women can be strong, women can be aggressive, women can be many things all at once. There’s a complexity that we’re working towards”. (Here’s Janet in a cool af drum battle)

Combining my love of J-Pop and amazing drumming, Kavka Shishido is literally the coolest woman ever. She’s been drumming since she was 14 and has created a badass vibe of drums, pop and catchy vocals. Anyone that can sing while drumming is a badass because it’s really hard…

A point to consider is one I came across on a post on Blogher, about Beyonce and her all female band, addressing how, “We never ask ‘Why do you have an all-male band, or why did you choose an all-male band?”. The writer goes on to suggest that this is a product of “so many socialization cues and cultural messages so we just figure if you are a musician, you must be male”. This links to an issue I saw raised on Reddit, why on YouTube videos generally of women doing drum covers, are they titled things like, “Sexy female girl drumming”. If posted by the musician- are they trying to capitalise popularity with their gender such as is criticised of YouTube famous Meytal Cohen who is accused of using her gender and ‘sex appeal’ to sell her talent instead of real skill or prowess. Female musicians are almost trivialised as ‘adorable dabblers’ while male drummers are typically glorified for being musicians. I’d have to disagree with this Reddit user’s view, if you watch Meytal’s cover of Nightmare (https://www.youtube.com/watch?v=Oh_cSFFyk5) you’ll see it’s clear this is a profession not a “dabble”, perhaps made more clear by the production that goes into her video.  Another example is this video of S. White, a Taiwanese drummer playing a cover of BigBang’s ‘Fantastic Baby’ (https://www.youtube.com/watch?v=wGbvxFycsos), has been uploaded by various users, tagged with titles such as ‘Gorgeous Girl Plays Drums’ or ‘clever girl plays drums well’, all sounding pretty patronising to me. Jack White (White Stripes…Meg White…female drummer) once said “It’s a real shame that if a women goes onstage with an instrument, it’s almost a novelty”.

Furthermore the actions of other musicians fighting sexism in the music industry should also be acknowledged as artists such as Grimes, Lilly Allen, Haim, Lauren Mayberry, The Tuts have been influential in surfacing this important issue in the media. While it sucks to be invalidated and belittled, as Kate Schellenbach (ex-Beastie Boys, Luscious Jackson) points out “it can sort of be an advantage that people underestimate you all the time, you’re constantly impressing people”. Finally, to address one Reddit user’s comment, “this concern having been raised so many times is not the voice of the practising female drummer, it’s of the bored modern feminist that wants something to bitch about!”,  here’s a practising drummer, a feminist and a women RAISING MY CONCERNS. Wish me luck in my grade 8 exam this summer I leave you with a clip of the diva of drums Sheila E. In the words of Prince, “Not bad…for a girl…”