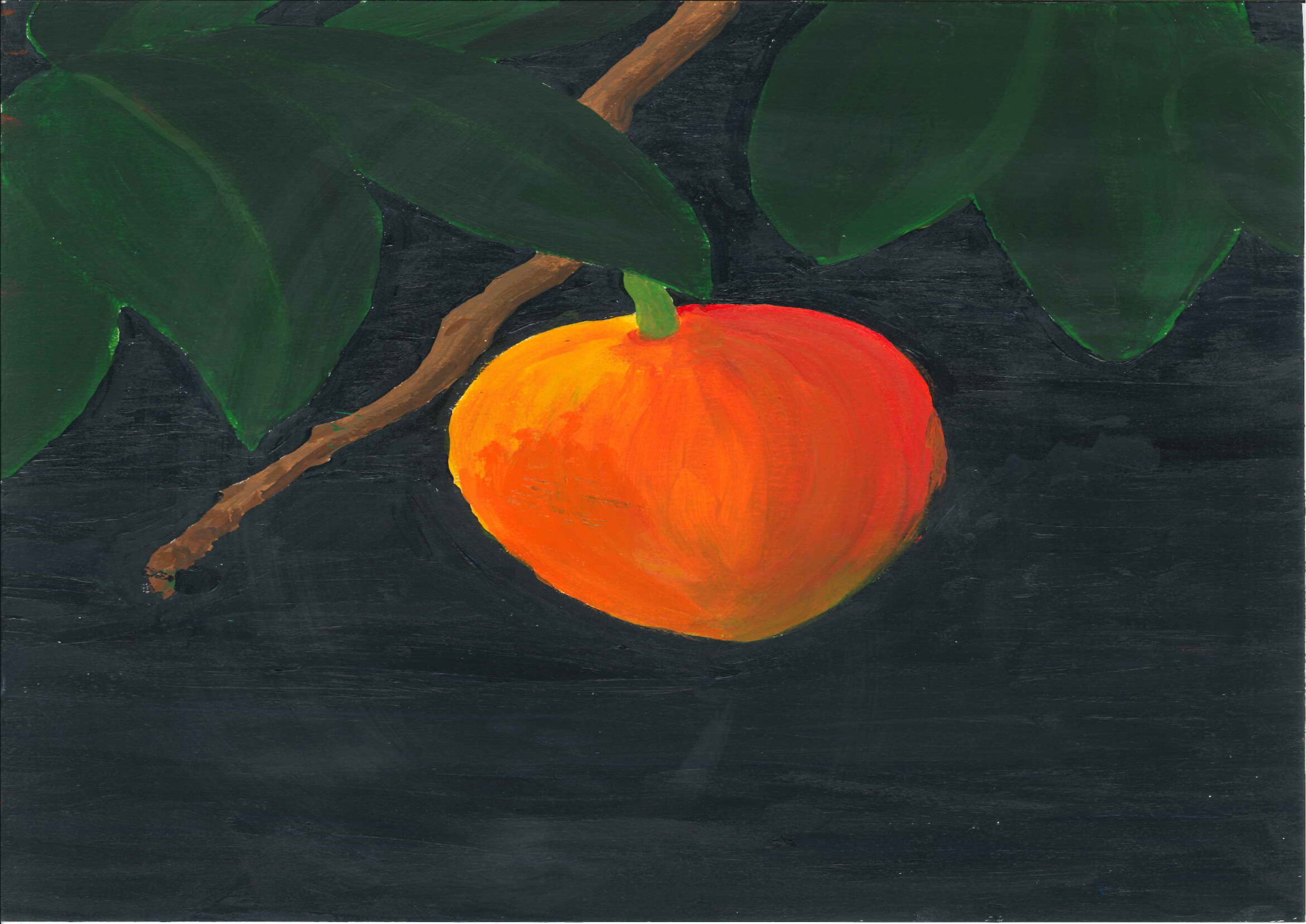 “Only four pounds for a box of four!”

Southall’s own sun hovers over the high street. A brown, skin-like membrane presents itself across the surfaces of dozens of cups of masala chai. In this suburb, steam rises from the windows of the shops selling warmth (sometimes bottled, smothered with ghee, or deep fried in vegetable oil) in various sizes. Throughout Decembers like this one, children, husbands, and grandfathers are lovingly swaddled in the layers of knitwear bought by wives and knitted by grandmothers.

One of these husbands sits at a street corner. The folding chair he has selected is twenty minutes away from giving up on him and the years of afternoon samosas (lovingly prepared by his wife, Paramjeet) bulging over the waistband of his trousers (lovingly made elasticated by Paramjeet as well). According to the handmade sign taped to the front of the table he sits behind, he is selling Fresh Authentic Indian Mangoes.

Noor notices the stack of red boxes lined with shredded printer paper first.
The man sitting at the street corner behind them tells her that they’ll be nice and juicy, just like the ones at home. That the insides are as soft and sweet. He smiles after telling her this, his lips drawing back to reveal two rows of browning teeth. No one else has thought to buy mangoes in the dead of winter from him.

Reaching into her purse, Noor fumbles around for a fiver. He chuckles.

This man is the sort who throws his head back whenever he laughs. Noor sees his teeth softened, sweetened by the immigrant fruits that he sells to second-generation desis like her. She hands over a note and he gives her a box. He spits his paan at the shop window behind him after he folds the note in half and places it in a box underneath the table. The shop window curses at him, threatening him with an £80 fine for spitting paan again. He wipes his mouth with a handkerchief found (lovingly) by Paramjeet in a drawer last week.

Noor has never understood paan and its appeal to the men whose saliva is rust-coloured because of it. Someone told her that it prevented bad breath, indigestion, relief from the back pain of lifting suitcases and sitting upright during the traffic on the way to Heathrow. Last week, she read an article in the paper about paan being illegal if it contained Substances that Produce a Psychoactive Effect upon the Person Consuming It. Her grandfather and the rest of his ilk spent their seventies in the paan shop a few minutes away from where she is now: perhaps that’s why he laughed so whenever he won at their Punjabi version of Texas Hold’em.

The man who sold her the mangoes shares the same glassy demeanour. She accepts her change (a pound exactly; it fits into her palm nicely). If her mother was here, she would’ve scolded Noor for accepting his price instead of haggling it down – she could’ve easily gotten fifty pence off, at least. As the fruit of her mother’s efforts, she ought to know these things.

On the 427: top deck, right at the front. Southall’s own sun filters through the expansive brow of the bus. Noor is lucky. The bus is relatively empty. The only other being present on the top deck is a man across the seats in the rear, clearly taking advantage of the fact that it’s always warmer towards the back. Noor’s seat seems less special now no one’s here to compete with her for it.

She sits with the box of mangoes on her lap. Four pounds now seems a little steep for the lack of weightiness of this box. Perhaps they’re the smaller type, she thinks to herself. Like the ones on the kitchen table in her relatives’ house during the summer: the ones so sweet that they were almost sour. Perhaps. Noor has spent several afternoons sucking the very last bits of sweet flesh from the skin of mangoes and then biting into the skin itself. As if it were a sort of forbidden fruit.

There is no one – save the momentary glances of pedestrians whenever the bus stops at a traffic light – to watch her now. Noor hasn’t eaten one of these since September. She opens the box (taking care not to upset the paper, lovingly shredded by Paramjeet) and feels around for a mango. The cold hard yellow sunlight streaming through the windows in front of her eggs her on. Most of the mangoes that she’s consumed throughout her lifetime have been devoured underneath the eyes of dozens of various suns. Noor can’t wait for the familiarity of soft orange skin, of cheeks sticky from saccharine pulp. The thought of eating a brightly-coloured fruit on a greying bus excites her more than she’d like to admit.

The lid of the box is thin. She lifts a mango from the box and rinses it in the light. A thousand Technicoloured Bollywood gasps sound as she inspects it: the mango is completely green and hard to the touch. Somewhat like a tennis ball. Noor has bought mangoes so unripe that they’ll probably be white inside, tart to the touch. There is no yellow sea on this little misshapen earth; only stiff green land.

Four pounds for a box of four mangoes which are now good for nothing. Noor has been ripped off. A small defeat, of course – things like this happen – but an avoidable one, nevertheless.

Southall’s own sun hasn’t followed Noor home because it forgot its Oyster card. Instead, a row of smaller, fluorescent suns light the premature darkness of her street. There is nothing remarkable about the decaying greyness of the pavement.

It can be said that Noor’s efforts to relive the past have borne no fruit. She could take them home. Put them in a paper bag, wait for them to come into their own. It wouldn’t take that long.