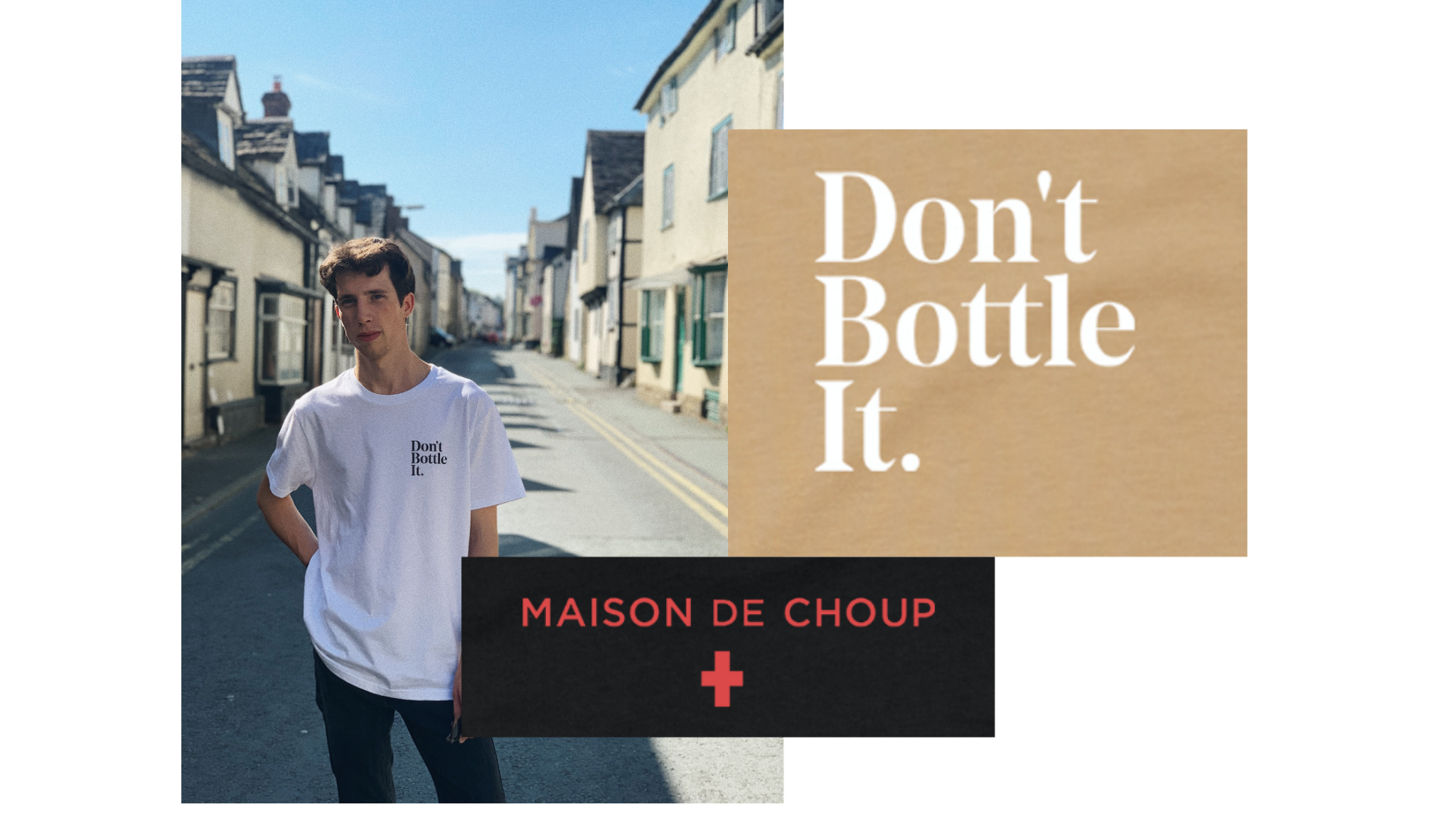 Mental Health problems are not linear. Everyone suffers in a different way, with different coping mechanisms. In my case, confining myself to my bedroom for 3 years whilst I received private therapy was my way of coping, but that was only one of the ways I coped. My biggest coping mechanism was talking; talking some more and talking too much. I spoke to my family about what I was feeling, thinking and worrying about most of the time, not in a negative way however, just to let them know what was going on. Then I realised that by actually talking about my mental health and telling people I was suffering, alleviated some of the anxieties I had within me. I found that by getting it out in the open I was unblocking my thoughts and letting them flow. I’m George. 24 years old. Anxiety, OCD and panic attack sufferer. I’m an entrepreneur, mental health campaigner, part-time worker at Sainsburys and also just enrolled on a 3-year Psychotherapeutic Counselling course. I’m on a journey to encourage everyone that talking about their mental health isn’t a weakness, but a strength. Let’s start today, together. 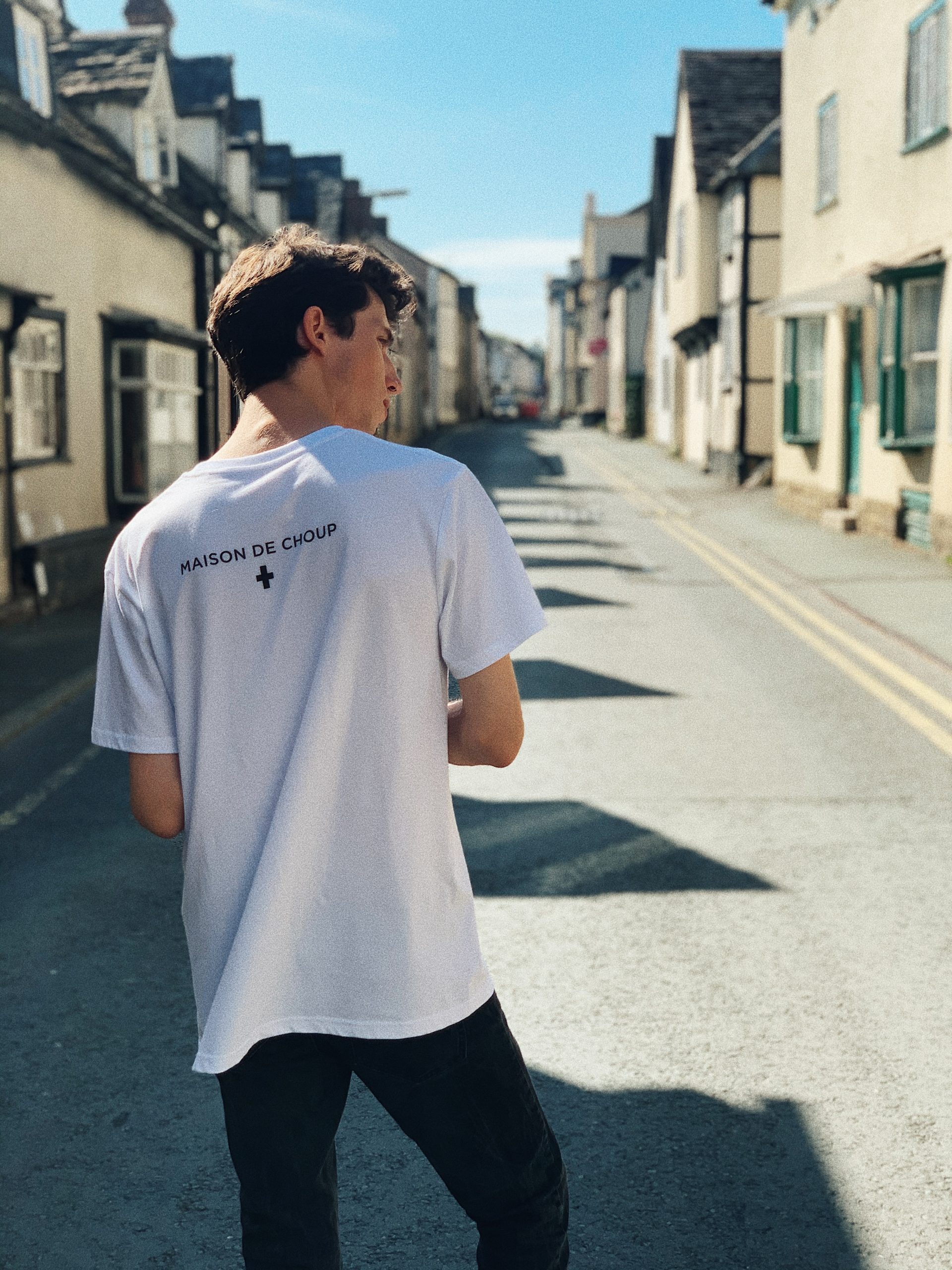 I started Maison de Choup a couple of years ago when I was suffering from severe anxiety, OCD and panic attacks. I used to write down and draw all my thoughts and feelings in these little notebooks, after a while I decided I wanted to apply them to something and eventually landed on the idea of a T-shirt to spread awareness for what I was going through. Maison de Choup is partnered with YoungMinds Charity specifically because when I needed help, I was told I’d have to wait 40 weeks to receive mental health treatment on the NHS. My parents were fortunate enough to send me privately and so I started my road to recovery. But I kept thinking ‘what about the young people who can’t afford to go privately, what do they do?’ This is when I knew I had a mission, to not only de-stigmatise mental health problems and raise awareness for opening up, but also to raise funds and help those young people who couldn’t get help.

I met Mickey this year, in a small mews apartment in London, however, our vision and ideas felt incredibly natural together. (Mickey J Ellis is collaborating with Maison De Choup for their Don’t Bottle It initiative). We had a socially distanced cup of tea outside discussing his story and mine, and what we’d love to do together. We were throwing around ideas and after listening to what he’d experienced I started verbally playing around the idea that men tend to ‘bottle up’ their feelings a lot more than women and then the link to ‘reaching for the bottle’ as a reaction to their suffering. It almost fell into place perfectly right there. From there, Mickey explored placement, font and colours for the text ‘Don’t Bottle It’ and we both fell in love with the simplicity of the design. It was an incredibly smooth collaboration as it felt seamless. We wanted the words ‘Don’t Bottle It’ to mean more than just bottling up your emotions. It had to encourage people to open up and talk, creating that conversation, so when we say ‘Don’t Bottle It’ we are suggesting for people not to ‘Bottle It’ if they are opening up about their mental health. It also has the meaning of not running to the bottle when you are suffering, but more to open up and talk about it with someone you can trust instead. During lockdown, drinking has also become a much bigger problem, it has, of course, helped some people to get through and this is ok. However, it has impacted others in a negative way, it has become their coping mechanism which has detrimental effects on mental health. We felt it was super important to highlight this, and again, try to encourage people to think about avoiding the bottle and start the conversation of opening up about how they are truly feeling.  Talking is the first and most important part of getting better, so it needed to be a bold, positive message, but subtle in design. 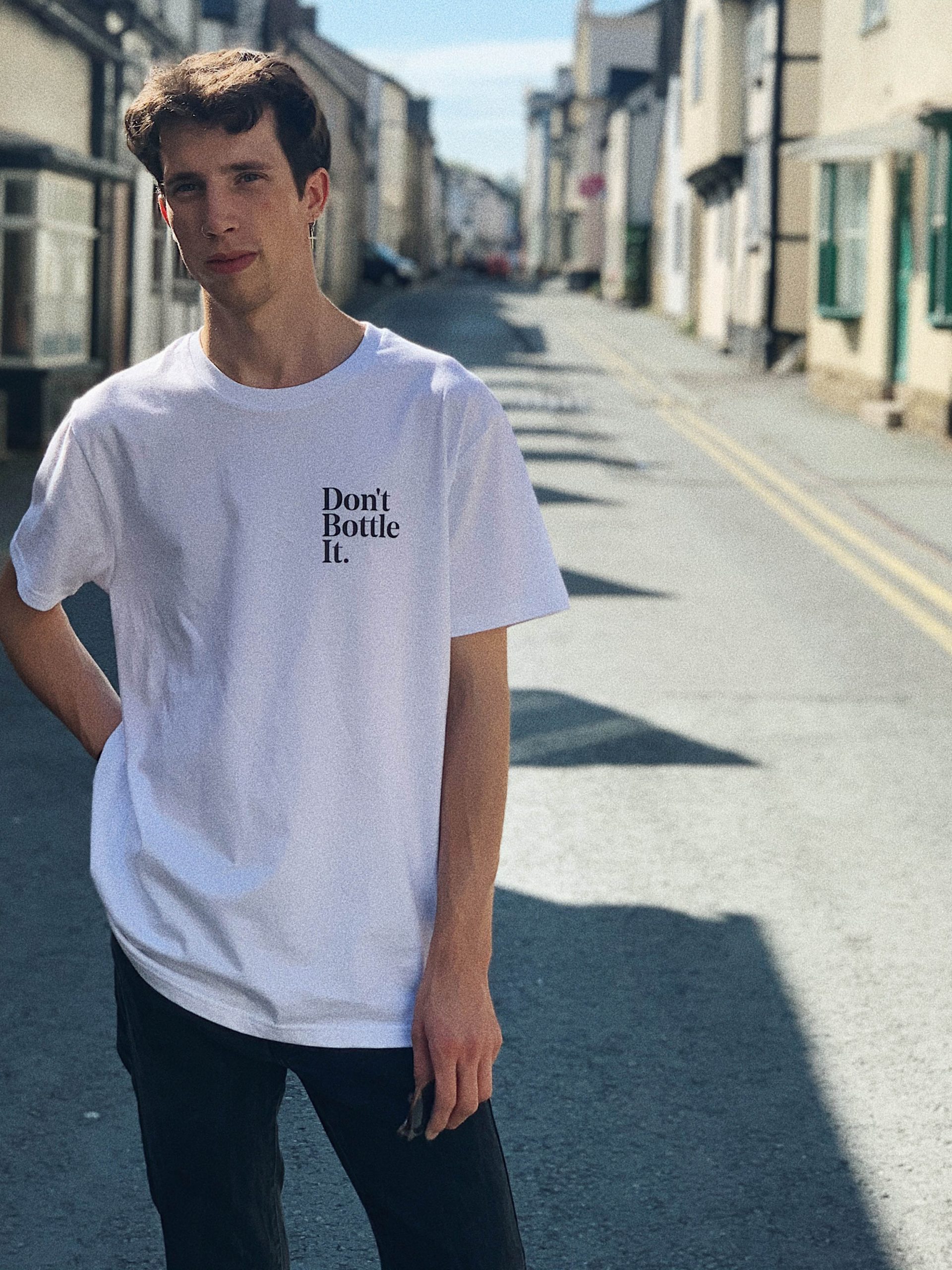 Mental Health Awareness Day should be every day, but as it isn’t at the moment, it is one of the most important days in the calendar. Although it can sometimes feel overwhelming knowing what to support and where to go, raising awareness can be as easy as texting a friend to ask how they are or posting a message on social media. Or, if you feel like it, buying a t-shirt that does all those things as well, including donating. The aim of the ‘Don’t Bottle It’ tee is to start that conversation, by doing that, we could be helping someone, if only one person. 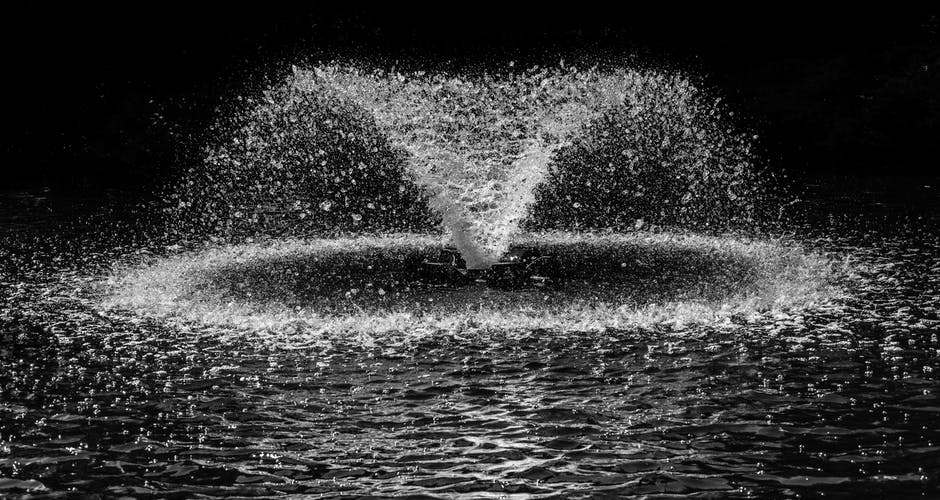 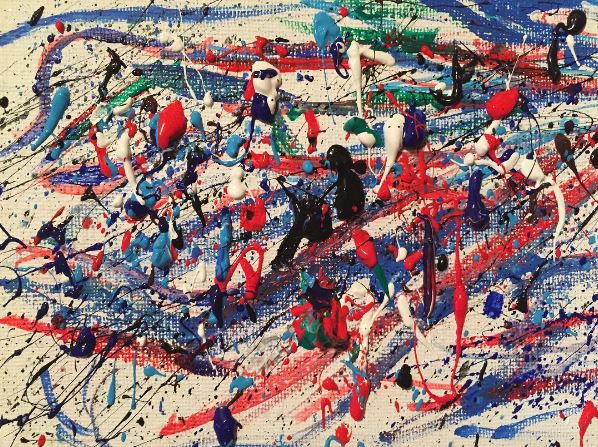 Guns In Their Houses – A poem by Elisa B 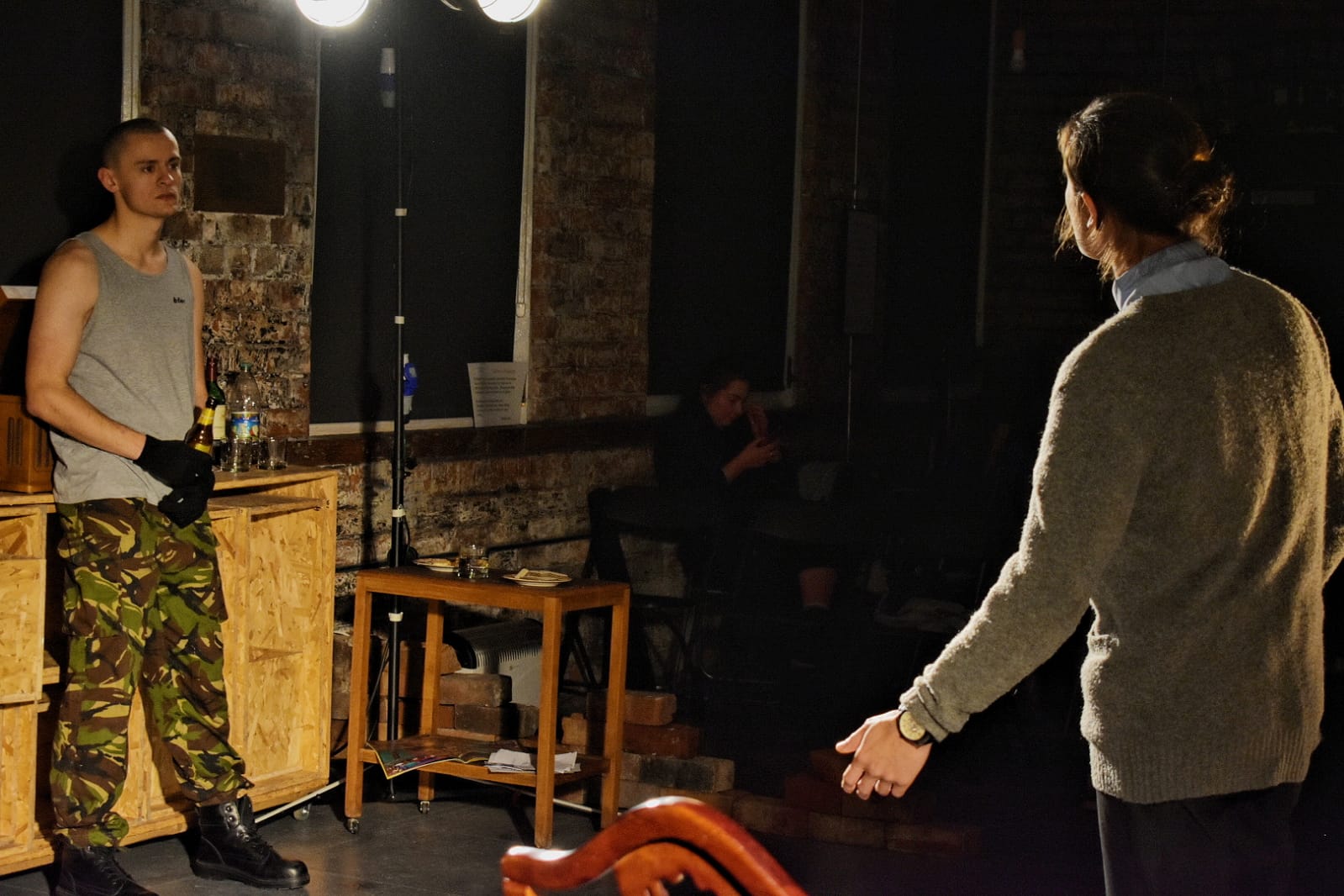