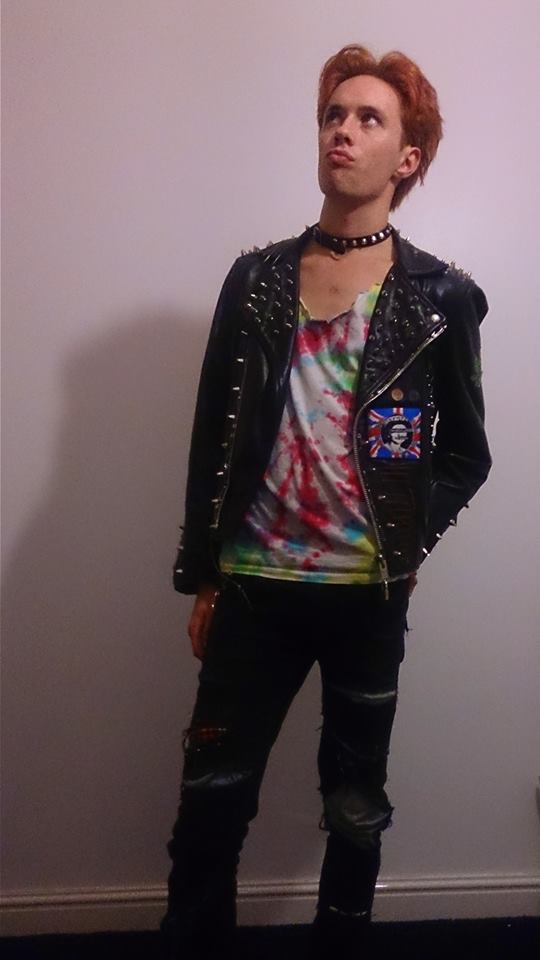 I have always been someone that inspires to stand out from the crowd, aiming not to be the same girl with the Topshop clothes, or belong to the black leather jacket and blue jeans gang. I have always stood out from the crowd – due to the colour of my hair and the eccentric style that I try to gain, but it’s those people who go to the next level which inspire me.

Scrolling through Instagram, Tumblr etc. you see the same girls/boys that seem to believe that they are the next designer, this isn’t a knock to them – do whatever you want with your life and follow your dreams, but additionally the fashion taste seems to stick. If the magazines say that this is what the models are going to wear, you know that the high-street stores will have that outfit in multiple colours and awfully produced clothes. However, it is often that you come across those who definitely stand out, confidence and fashion exuberate. It doesn’t matter what era they dress from, they always seem to make a statement and actually seem to have a passion for their clothes.

It seems like the only way for fashion to move forward, is to equally move backward in time. This can be seen right now, the 70’s have made a comeback – flares, bell-bottom sleeves and tied tops, however if this wasn’t pushed across the catwalks and into stores, many girls and boys would never touch flares.

Once again, I moved to my social media sites searching for those who stand out from the crowd and I came across some lovely people who have a passion for what they wear and what they stand for, which is enlightening. I decided to take to the interviewsf as it intrigues me and maybe they had some advice…

Hello Ciaran, describe yourself to me in little detail? I’m from the Durham area, 17 and I’m very interested in music of the late 20th Century, particularly the 70′s with punk and a lot of other types. I’d say I’m a collector; I take influence from many different things around me and add them to my style. If I see something I like, you’ll probably see me wrapping myself in it (or something similar). I’m also pretty DIY cause I don’t usually have money to buy nice things so I’ll take something old and overused and alter it or something, use it as my own.

The 70’s are a great period to dress from, what do you think inspired you to choose that era?  The 70′s is a great period, yes! How it started for me, well I was 14/15, so bored and uninspired and then somebody played me ‘Anarchy in the U.K.’ by the Sex Pistols – I was amazed.“Who’s that ginger guy, he looks so nasty and disgusting, and the guitar is horrendous – but it’s SOCOOL”. Ever since then I gradually became more interested in punk and other sorts of music that link to it or surround it in some way. The Pistols are definitely my favourites, my saviours.

What are your key pieces in the wardrobe? That’s gotta be my leather jacket and DM’s. I love all my clothes but those I could not live without. The jacket I bought at a charity shop for £15 (lucky me) and over time I’ve added all sorts of studs and shit and it’s just so cool. I tend to mix and match a lot of my clothes with ripped/altered and smart clothes, cause it’s more fun that way.

You seem to know a lot about your era, what do you think made it as ground-breaking as it was?  Well, it was the fact that punk rock was people kicking the door down and choosing for themselves, “This is how I want to be, and I don’t care if you don’t like it”. Or something along those lines. It was also though people being honest with the serious social and political problems that Britain had at the time, a voice which people wanted but weren’t getting. Of course don’t forget the pure shock value of it, I mean look at these people wearing bin liners and spiking their hair up with bright colours, fuck me – that’s someone you ain’t gonna miss when you walk down the street.

Do you think that the 70’s were a time period that revealed more to society, in terms of lifestyle choices, the sexual revolution, social and political issues?  Yeah, even with Glam Rock in the early 70′s you had the likes of David Bowie (an unusual love of mine) and T. Rex prancing around very woman-like, yet not even being gay. Huh? That was quite a thing at a time when homosexuality still wasn’t accepted. Punk rock then later on came with a message of freedom for everyone – woman and men ended up just as scary as each other, social and political issues were being addressed and people weren’t afraid to do what they wanted. Lovely.

As we can see, the 70’s seem like something that inspires you, what about the music?  As I’ve said earlier, the music was the key, because of the messages it carried and the way it was put forward, people were absolutely going to listen and be influenced by it. And they did.

What was the best advice you were ever given, that helped you grow as a person?  The best advice I’ve ever had, weirdly I’d have to say would be “I wouldn’t do that”, “That’s a really bad idea” or something like that. Discouragement. No, I’m not even joking. If you tell me to do something I’m more likely to end up doing it, and the majority of the time it’s ended up turning out brilliant and getting the same people telling me “Actually that was a really good idea Ciaran, well done” (excuse the arrogance). There’s been a good few times where I messed up, but yes,“thankyou for your support”.

Do you have any advice on girls or guys that want to change their style? Would you say that research is the best answer? My advice would be – Yes, do your research first. Find what’s right for you and don’t misinterpret it by lack of knowledge. I mean, the attitude is what’s important really, not so much the look. If you get criticism, take it on board with an open mind cause some of it’s actually really helpful. But never forget what YOU want.