The Radical Notion Of Being Kind 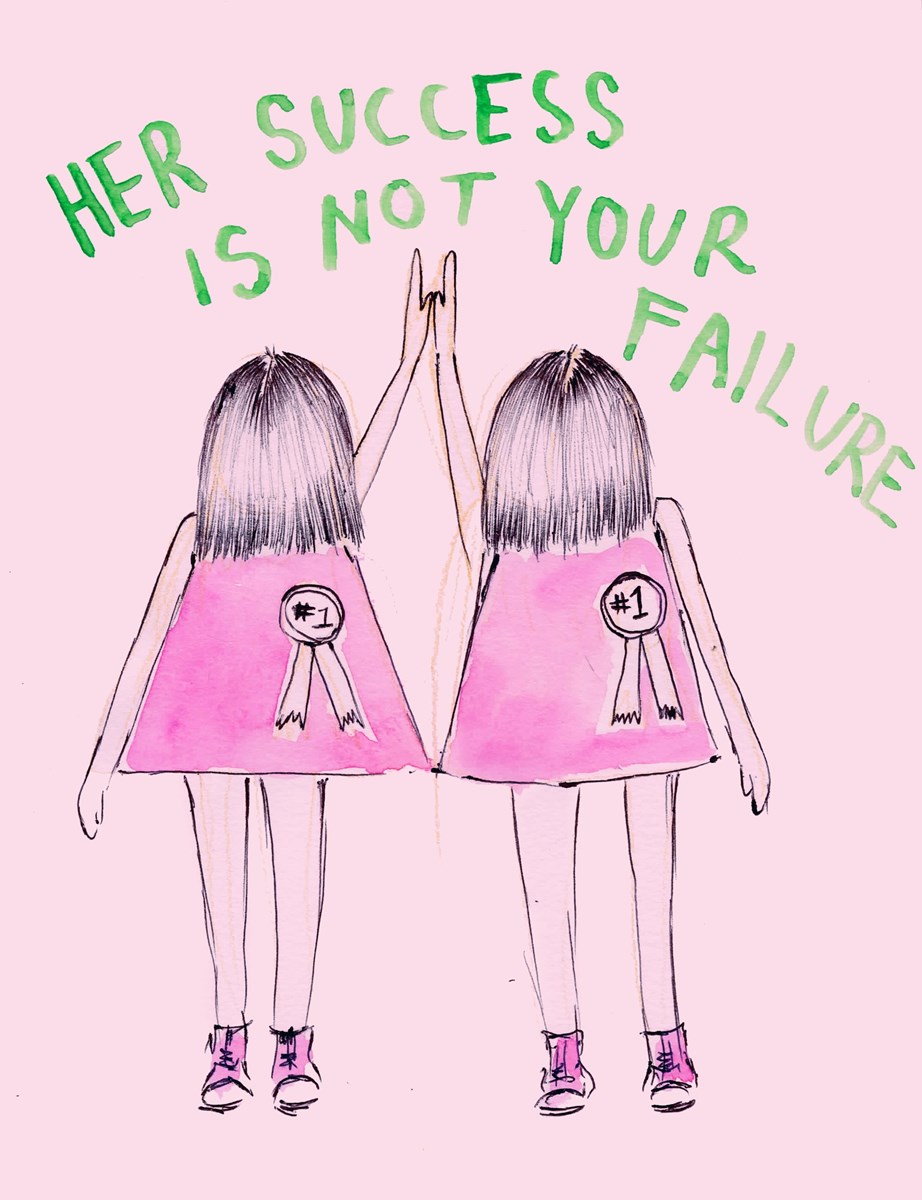 Hi I’m Lucy and I enjoy complimenting women on Instagram.  Whether it be women I’ve never met of my best friends; If you post a selfie I’m gonna tell you that you look amazing or gift you with 5 flame emojis. However I’ve recently learnt that not everyone does this.

The other day on Instagram I realised that some women seem more willing to compliment a man than another woman and it sent me spiralling. Do we as women naturally see other females as competition? Do our animalistic senses force us to remain constantly cautious or do we need the possibility of re-payment for our kindness such as the possibility of a short fling stemming from the words “you’re so hot” and a strategic use of a heart eyes emoji. Why in 2015 are we still more willing to be cheerleaders for the guys and seemingly less willing for the girl?

But its not just online. I often find myself leaving a conversation feeling drained as some women appear incapable of talking about anything other than others. Ok I know we are all guilty of gossip but surely we can talk about something other than [enter name here]’s outfit last week and how we wore it sooooooo much better. We women appear so willing to label others with words like “Two faced”, “fake”, “bitchy” etc rather than “hilarious”, “strong”, “beautiful.”

In a world where we are constantly battling with issues like equal pay, social stigmas about women and oppression from the media, why are we bashing our own team? Where’s the team spirit gals? Where’s the girl power?

I talked to Caitlin and Sonja; two amazing women who I see constantly being cheerleaders and spreading the love for others on social media, about kindness and why is appears to have become almost radical…

What would you consider to be your favourite girl power quote?

“Although she be but little, she is fierce” – Shakespeare. I like to think it applies not only to physical size but to women’s power in general

As someone who admittedly does compare themselves to other women and as a result often gets themselves into a stew about how they’re not as beautiful or talented or so on as others, it’s difficult to think of advice. but I guess the most important thing to remember is that even though you may not feel as beautiful as them, compliment them. Tell them what it is about them that you think is so special. try to admire their beauty without questioning your own, the chances are there are many others admiring you and you have no idea.

How would you describe your best friends?

Quirky and adventurous, but always have a sensible head on when necessary and are always there for me when I need them to be

What’s one thing you wish you saw more of in the world?

Parents bringing up their children to believe that gender, race and sexuality don’t matter

What would you say is the best thing about have female friends?

Being able to talk about “taboo” topics, such as sex and periods etc., with each other and share experiences to help each other through

What do you wish women would talk about instead of other women?

Whatever they’re passionate about, whether that’s music, art, politics, sport… we should encourage each other’s interests and strengths as long as we’re not degrading others whilst doing so

Do you think kindness between women is a step necessary to gaining equality of sexes?

Definitely. to be honest I think kindness between everyone is one of the most important things in the world. That’s another thing I wish there was more of in the world.

How do you try to support other women?

Always make an effort to compliment others whenever I can and to give advice whenever I can. I’d like to feel that any female, or male of course, can talk to me about anything and I’ll do my best to give them support in whatever form I can think of, be that a pep talk or a hug or just to be there for them to rant at

Why do you think the idea of being nice to each other has become almost radical in today’s society?

I wish I knew. It’s one of life’s biggest puzzles for me. the only thing I could possibly think of is that people feel embarrassed to be openly and forwardly friendly in case they are rejected or teased? that still doesn’t make sense to me though.

What would you consider to be your favourite girl power quote?

“It is amazing what a woman can do if only she ignores what men tell her she can’t.” – Carol K. Carr, India Black

I feel like, especially in Western society, there’s such a competition between EVERYONE. I was reading a really sad article recently about suicides in universities in the US and how from these unbelievable expectations, kids were choosing to kill themselves because they thought of themselves as failures, instead of making mistakes. I think we try to push this idea that everyone needs to be perfect and better than everyone all the time, and we see it really prevalently in social media between women, and this whole facade of being perfect, and since it’s a competition, we tend to not compliment and celebrate our achievements as much. I guess what I’d like to say is: HEY, LADIES. You’re beautiful, but just because someone else is ALSO beautiful doesn’t mean their beauty detracts from yours. It pays to create relationships and connections between people on social media and instead of a competitor, you may discover a friend.

How would you describe your best friends?

My best friends are some of the most beautiful, intelligent, creative and ridiculous people I know. I am constantly in awe of my friends and the amount of times I have told them how jealous I am of them is innumerable. I tend to have a relationship where I call them losers or anything else that would seem mean as a way of affection, but I also cannot stop myself from calling them the most beautiful people I know, frequently, because they simply are and I get overwhelmed with their amazingness.

What’s one thing you wish you saw more of in the world?

Decency and respect? I was talking to a friend of mine a couple months ago about when we think social justice warriors go too far, and it’s a tricky subject, but we both just came to the conclusion that we wish people would just be decent towards each other. We don’t all have to be farting rainbows and constantly be blowing kisses to strangers, but if we all had some common respect towards everyone and were LITERALLY JUST DECENT HUMAN BEING, the world could be so awesome.

What would you say is the best thing about have female friends?

I have my fair share of friend groups of both genders. When I hang out with my boy friends, I definitely have more of a “bro” persona, and it’s a completely different atmosphere. I love it, don’t get me wrong, but there’s something so magical about a solid group of female friends. There’s a level of intimacy, an aura of love and so supportive. When you find a group of girls who don’t knock each other down and instead create this thriving community of support between everyone, it’s really TRULY one of the best things in this world. I’d never trade my friends for the world.

What do you wish women would talk about instead of other women?

I’ve been in situations where the girls around me literally won’t stop talking about anything that has any relation to the fact that one other girl at our school wasn’t wearing a bra, AND JUST RIPPING ON HER. I got out of that, pronto, and started to realize that my little, lovely, accepting group of friends is not always the majority, and there are girls out there who really, properly act so mean to others. Instead, I’ve found the best things to talk about with female friends has always been about internal struggles, social issues, or man, even just talking about how cute that boy/girl is over there and if one of us should go hit on them???? The memories are so much more fun, and damn do I always feel gross and icky after shit-talking another girl.

Do you think kindness between women is a step necessary to gaining equality of sexes?

This answer is hard because I’m really not sure. I’ve gotten into a funk lately where everything about this issue has become so impossible-seeming. But, I feel like, any step towards getting any kind of human decency is a step forward FOR HUMAN KIND. Maybe not necessarily in the struggle for feminism, but for general world-betterness, you know? I’d hope that somehow, in the end, it would help gaining equality of the sexes.

How do you try to support other women?

Basically, I try to be a loving, nice lady to all the ladies out there. Sometimes, we’re far and few between, or at least, that part of us can be hard to always be present. So, I push past any negative feelings and I embrace the beauty and intelligence of others and I frequently tell them so. I think, even small compliments or comments on a daily basis make people so much stronger, even just knowing there’s someone out there who SEES you, who SUPPORTS you and who GOES OUT OF THEIR WAY to tell you so! I try to be that person who does the little things, who slowly has a small part in the formation of your self-confidence, who just REALLY WANTS TO KNOW THAT YOU ARE AMAZING.

Why do you think the idea of being nice to each other has become almost radical in today’s society?

This is really sad to think about, that kindness is out of the ordinary and that those who are nice to each other are some weird, solitary random blips in the system. I think it’s simply because we try to push this perfection so hard, and for some reason, society today values individual success so much more than it does any kind of community. Our society tells us we need ONE PASSION, and that passion is the only thing we can pursue, and we need to get really good at that one thing to have a good life. But we also need to be beautiful, smart, social etc etc etc while holding to our passion. And when everyone is so focused on their own success, we forget about everyone around us and we forget to communicate and we forget that everyone else is struggling just as hard as us, but they aren’t showing it, as some weird facade of perfection. It’s the duck syndrome, where we all look like we’re doing great on social media, but under the water, we’re all peddling so hard to keep up. In the end, I think if we all started supporting each other even just a little bit more, even just by telling someone you’re there for them, they’re beautiful or that you admire them, could make the world of a difference to someone slowly drowning, and hopefully one day won’t be so GODDAMN RARE.

Personally I think kindness costs nothing and I’m a strong believer that what you say about someone reflects more about you as a person than them. It takes nothing to make someones day, give someone a compliment, support your friend’s projects, offer your advice and time. It’s so simple, but if we all had a bit more compassion it might be easier to actually start improving the situation of bigger issues.