From the Ladies’ Room Door: Getting To Know The Red Stains

Go in any women’s toilet in almost any venue in Manchester and the back of the door will likely look the same. Two random names were there, someone’s taken it upon themselves to write you a motivational manta, and bigger and bolder than all of that; The Red Stains. It’s always there, becoming a staple for independent venues to be marked by the red lipstick scribble, so it comes as a surprise to hear that the owners of such a well-known tag have only just released their debut single, Mannequin. The familiar name belongs to Manchester’s contemporary post-punk band, The Red Stains, making music as bold as their sign. Getting to know the people behind the sharpie pen, Lucy Harbron caught up with the band via Facebook messenger, cause it’s 2020, no one calls anymore.

Do you want to start by just introducing the band? Who are you guys? Where are you all from? And how did you meet?

We are Natalie Emslie on vocals, Sterling Kelly on bass, Ella Powell on synths and guitar and Ben Dutton on drums. Natalie is from Edinburgh; Sterling is from Nottingham and Ella is from London. Ben is local from Manchester. We met on a night out in Manchester at Peer Hat.

So for those of you that aren’t from Manc. Was music a big factor drawing you to the city?

Natalie: At the time, I wanted a new start and the music gave me a sense of belonging.

Sterling: Yeah, here for the tunes.

I guess kind of as varied as all your hometowns there’s a lot of different influences in your sound.  How do you go about balancing and merging all your different sounds and tastes? Or do you all tend to approach a new track with the same vibe?

It seems to be that opposites attract. We all have really different unique styles in our instruments that we manage to collage together. We don’t use the influence of everything we listen to. Only what fits for The Red Stains, has an influence on our sound.

And how would you describe that sound in your own words? 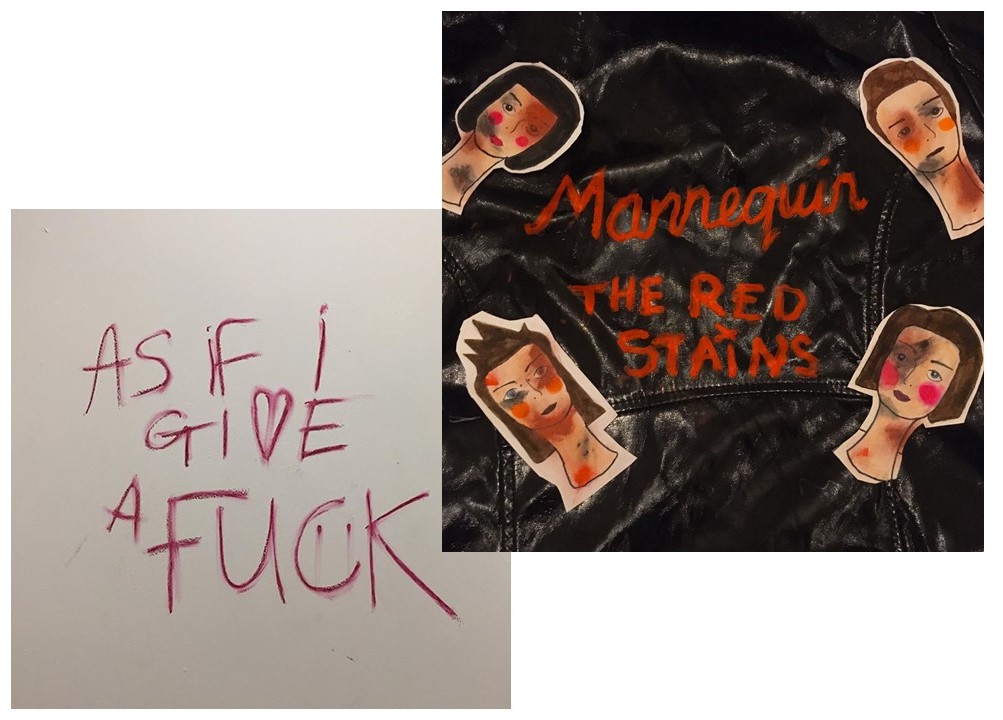 With the name The Red Stains and a lot of the lyrics in Mannequin, there’s a clear political influence and feminist undertones. Is politics a major inspiration for your work when it gets down to lyric writing?

Our songs are protest songs, a controlled kind of anger. They are a tongue-in-cheek and sarcastic response to what is going on politically, our life experiences, the society we live in.

When you’re song-writing does one personal normally come with the idea, or are they born as a group out of conversations?

The idea for the song came from our own experiences.

Natalie: From a lyrics’ point of view, I pretty much had the song about objectification down in a notebook. Sterling looked at them and then added the line ‘Mannequin, just a body’ and that was in a pub.

Sterling: I heard a song playing in the Peer Hat and we got hooked onto the bass line and inspired by that for Mannequin. The rest of the music followed later in rehearsal.

The Red Stains have been known for a while via toilet doors across the city. How did that whole thing start? As the signature seems to have become infamous?

Sterling had a red sharpie, Nat had a lipstick, they were both drunk at a gig and just thought they’d do some decorating! We never thought it would get so much attention!

Why did you decide on Mannequin as your introductory single?

We wanted to send a strong message with our first song, and show the world that we’re here to be listened to.